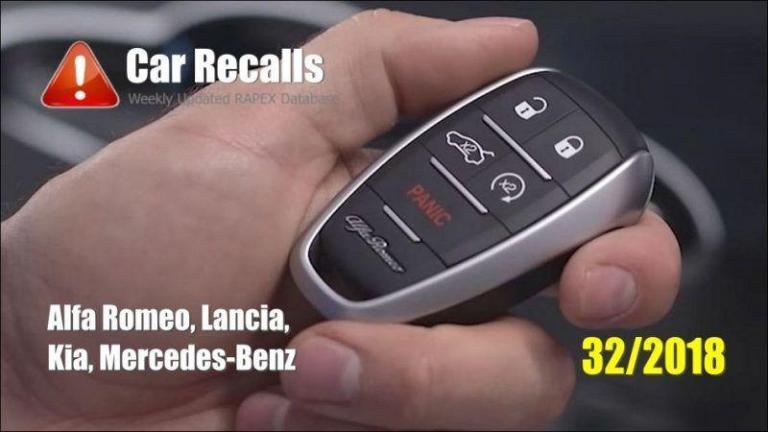 Five models of four car manufacturers were recalled at the 32nd week of 2018 through the Rapex system. Alfa Romeo, Kia and Lancia announced one recall each, Mercedes-Benz issued two. The clutch problem threatens the new Honda CRF 250R motorcycles.

Alfa Romeo does not appear too often in the Rapex Recall List. The last time it was back in March due to the inadequate brake and clutch fluid of the Giulia, Giulietta and Stelvio models. A year earlier recalled Italians the Giulietta models (produced from May to June 2016) because of an inadequate ABS control unit – see our archives. The new recall is again concerned with Stelvio (XII. 2016 – V. 2018), into which electrical circuit can penetrate water and disable some systems from the operation.

Even the Lancia and Kia brands really are not often in the Rapex lists. Lancia Ypsilon appeared again after a year with a negligent defect of poorly tightened wheel bolts. If the owners did not change to winter tyres, it´s now the right time to take a look at the wheels of cars made from September 2017 to May 2018.

At the hybrid crossover, Kia Niro produced in 2017 the oil might leak on the power electrode inside the hydraulic clutch actuator. This may result in a short-circuit, leading to a fire.

Two recalls were announced by the Mercedes-Benz at the 32nd week. On certain S Class (Aug. 2017 – Feb. 2018), the nuts to attach the conductor rails inside the fuse box in the boot may not have been installed. This could lead to a fire or failure in the engine functioning, seat belt functions and the dashboard. After a less than a month G Class appears again o the list – see our archive. The Mercedes-Benz G 63 AMG (December 2017 – April 2018) may have a defect in the rear brake calliper brackets. They can develop cracks and fail.

We also added a new recall in our new section moto-recalls.eu. Due to the clutch overheating, Honda is recalling the Model Year 2018 CRF 250R motorcycles.