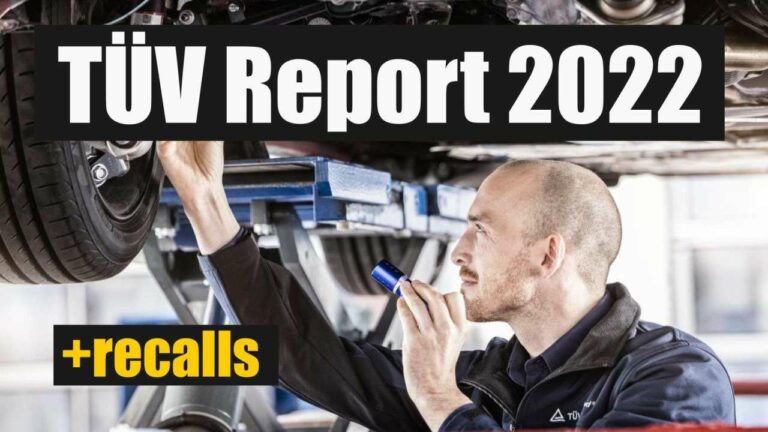 The 50th-anniversary edition of the TÜV Report 2022 includes the results of technical inspections from all TÜV locations in Germany. It reflects data from 9.6 million technical inspections (TIs) between July 2020 to June 2021. In addition to the percentage of failed attempts to pass the TI, it also tracks the average number of kilometres driven.

As in the previous two years, the overall winner of the TÜV Report 2022 is the Mercedes-Benz GLC. The rate of serious defects is only 1.5% for 2- to 3-year-old cars, the lowest of all vehicles inspected. The Mercedes B-Class and Volkswagen T-Roc also reached the podium in the same age category. In the other categories, the Audi Q2 won among cars aged 4 to 5 years and the Porsche 911 in the 6 to 7 year age group. Among the oldest cars, the Audi TT came out on top.

The most common defects

One of the most common faults with older cars is an engine or gearbox oil leak. Worn brake discs, brake line problems and suspension faults are other reasons why cars most often fail their inspection.

The TÜV Report 2022 mentions two areas of particular concern for the cars inspected – lighting and suspension. With older vehicles, tail and brake lights often fail to work. Suspension faults are not just limited to low-priced or high-aged cars. Higher failure rates in the first years of operation are not infrequently found also with German premium manufacturers. Several recent recalls are also indicative of the problems.

In the following summaries, you will find a ranking of the 222 models by year of manufacture. We have added a link to known recalls for each inspected car.

2022 TÜV Reliability according to the age of the car

Among the youngest cars inspected, the Mercedes GLC and B-Class, as mentioned earlier, are at the top. For the first time, the Volkswagen T-Roc appears in the rankings in third place. The final positions are occupied by three Dacia models in the company of the Citroen Berlingo, Renault Kangoo and Fiat Tipo.

In this category, the Audi Q2 unseated the Porsche 911 from the top spot. In fourth place behind the Mazda CX-3 is the Seat Ateca. For some, the last position for the BMW 5/6 Series may come as a surprise. At the bottom of the table, we also find two Dacia and two related models, the VW Sharan and Seat Alhambra.

The long-term leader in this category is the Porsche 911, and this year is no different. Ahead of the two Japanese representatives, the Suzuki SX4 and the Toyota RAV4 is the VW Golf Sportsvan. At the bottom, again in the company of the Dacias and Renaults, is surprisingly the BMW 5/6 Series. Almost one in five of these cars fail the technical inspection.

The Audi TT fares best among cars produced in 2012 and 2013, followed by the Mercedes B-Class and SLK. Fourth place goes to the Mazda CX-5. The last three in the table – Dacia Logan, Renault Kangoo and Fiat Panda – have around 30% unsuccessful attempts to pass the technical inspection.

Among the oldest cars, the Audi TT is also a good choice. The BMW X1 and Audi A1 follow in the rankings, with the Honda Jazz and VW Golf Plus sharing fourth place. The last ranks here are also reserved for the Dacia Logan and Sandero, which are kept company by the Fiat Panda and Kia Picanto.