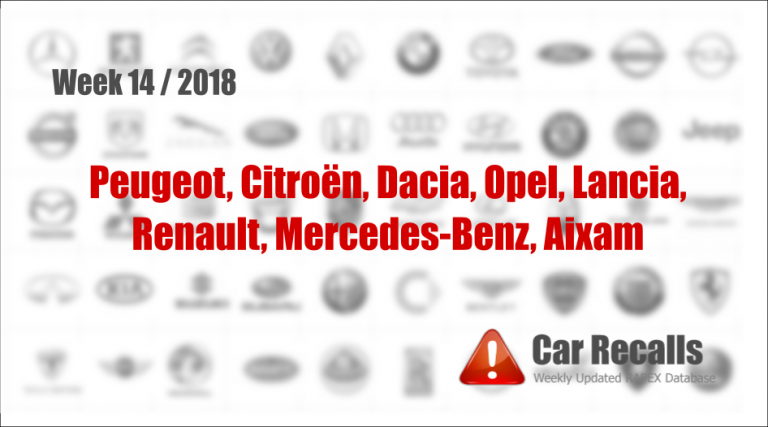 Ten automotive recalls were announced through the Rapex alert system in the fourteenth week of 2018.

Overheating of the engine may occur due to a problem with the engine control software on some Peugeots and Citroëns produced between 2014 and 2015. It concerns Peugeot models 308, 3008, 508, 5008 and Citroën C4, C5, C4 Picasso, DS4 and DS5. A short-term problem was noted with the Peugeot 208 and Citroën C4 produced at the end of November 2017: The screws anchoring the alternator and the air conditioning compressor may not be tightened to the correct torque. The alternator or compressor could release from the engine and fall onto the road.

At the Dacia Dusters made between June to October 2017, a start-stop system may fail.

Opel recalled the 2018 Crossland X due to the possible oil entry into the intake circuit of the engine back in January. In April, Grandland X is recalled with the same defect.

Lancia Flavia (2012-2015) has a problem with active head restraints, Renault Zoe (2016-2018) with a parking brake. Mercedes-Benz Sprinters with compressed natural gas operation from 1997 to 2006 may experience corrosion and cracking of the gas-pressure tank.

Serious problem is also reported by the French manufacturer of small Aixam cars built between December 2016 and December 2017. A defective control relay might prevent the engine from being switched off.