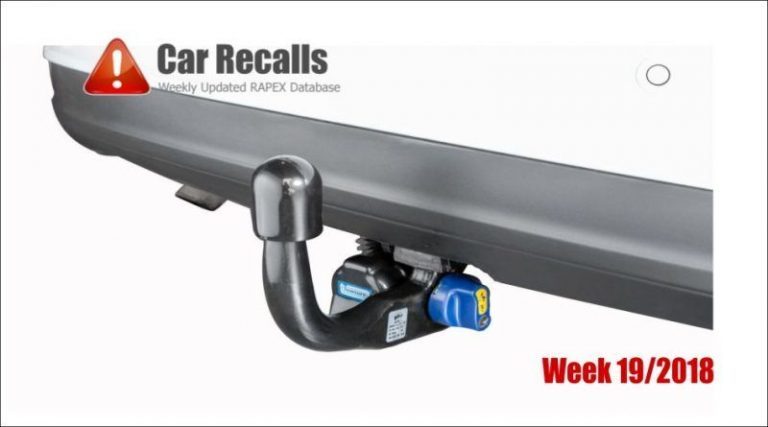 In the nineteenth week of 2018, eight recalls were announced through the Rapex system. However, we have included only seven in our database.

If you have a new Audi Q2, A3, A4, A5, and the mechanic will replace your windscreen during a routine warranty check in an authorized workshop, don´t be surprised. You probably have a car made on August 29, 2017, when the workers on the assembly line apparently did not have their day. The adhesive attaching the windscreen is not sufficiently secure and in the event of an accident, the protective effect of the passenger airbag could be compromised. We mention this accident in this article only and we did not include it in our Audi archive.

On the contrary, there are more and more recalls in our archive, that has something common with towbars. The most recent Peugeot 3008 (2017-2018) is recalled, where the bolts attaching the towbar may not be correctly tightened. The same issue was reported at the beginning of May with Opel in the related Grandland X model. In March, Volkswagen Crafter (2016-2017) also had to be serviced due to poorly tightened bolts at the towbar. And another problem with the incorrect contact between the towing harness and the trailer coupling was reported with Dacia Duster (2016-2017) and Renault Scenic (2017).

We must also not forget that the German manufacturer has recently recalled the universal ball coupling AL-KO K50 Ø50 – E1 SSR-011763. If the ball coupling were to break, this could lead to the trailer becoming detached during travel.

A child lock may fail on the Kia Rio models made in April and May 2017. The cable length of the rear door lock assemblies may be incorrect. A similar problem with child lock was encountered in the past by the owners of Renault Talisman, Megane, but also Škoda Octavia, Skoda Rapid and Skoda Citigo, as well as Seat Ibiza, Seat Leon, and various Volkswagen models.

Ferrari recalls the 488 GTB and Spider models due to a software problem. Critical brake disk wear is not indicated by a warning light or warning message. This could lead to damage to the brake disk and increased risk of an accident. The recall affects vehicles produced between January 2015 and November 2015.