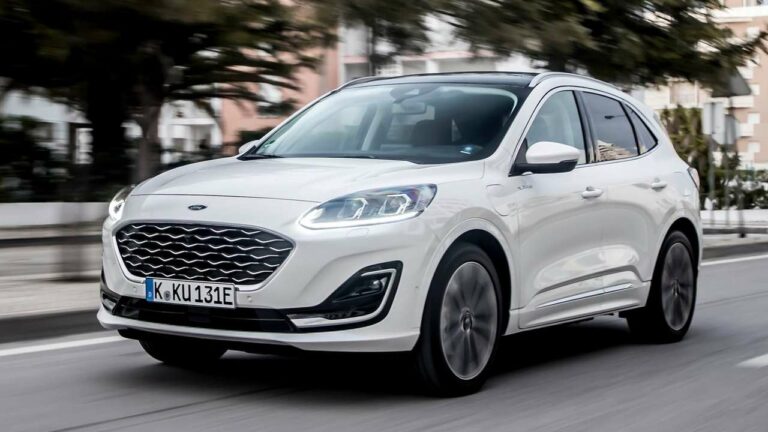 The increased fire risk in the engine compartment is the reason for the recall of more than 100,000 Ford Kuga hybrids.

The recall, with the internal code “22S47“, concerns 106,849 vehicles with a 2.5-litre petrol engine that is fitted to both a plug-in hybrid version (PHEV) and a full hybrid version (FHEV). The affected compact SUVs were manufactured at the Valencia plant in Spain between August 2, 2019, and June 13, 2022.

The defect could damage the engine block or oil pan, a Ford-Werke GmbH spokesman told kfz-rueckrufe.de. “Due to the design of the engine under-hood guard and the Active Grill Shutter system, oil or fuel can accumulate under the engine cover under certain operating conditions and migrate to ignition sources, resulting in a possible fire under the bonnet, melting of components or smoke generation,” he said.

According to the spokesperson, the authorized workshops are drilling additional drainage holes in the underbody protection so that oil/fuel cannot accumulate there. “In addition, the active radiator grille will be modified to improve airflow to the engine while driving, thereby reducing the temperature in the engine compartment,” he added.

It is not a fault with the engine

A spokesman for Ford-Werke GmbH stressed that the recall relates to the specific design of the engine compartment, not the engine itself. Therefore, no action will be taken on it. “The main focus of the remedy is the Active Grill Shutter (AGS) system, which is modified by the removal of four louvres to improve the airflow under the bonnet significantly. The additional drain holes are merely an accompanying, preventive side measure.”

According to the same source, this is only a precautionary action for most of the recalled cars, as the carmaker expects only a very low probability of real damage (about 17 cases per 100,000 vehicles).

This isn’t the first time Ford has recalled the Kuga hybrid SUV. Two years ago, we reported on the risk of fire and the suspension of sales to customers. Ford even compensated owners for not being able to use the hybrid system to its full potential. Read more in the following articles: