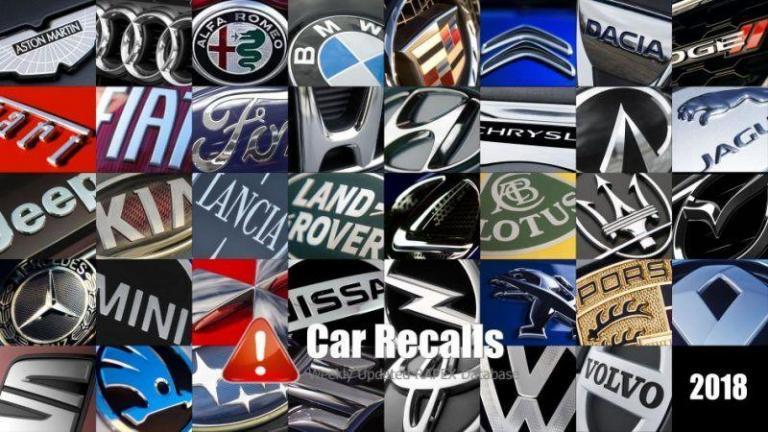 Most of the recalled vehicles were in some way troubled by engine problems (142). A defect of the airbag or restraint system occurred in 73 models. The same number of cars (73) were at risk of fire. Defects on the suspension were reported in 40 recalled models and 12 of them had steering problems. It should be noted that the Rapex records only dangerous defects that compromise the crew’s safety and health.

A comparison with 2017 shows that some carmakers were recalling much more than a year ago, while other brands significantly reduced the number of recalls. From 17th place in 2017, Mitsubishi has climbed into the top ten, similar to Opel which moved from the 15th position to fourth. Volkswagen jumped six positions to second, Hyundai also headed ten positions up.

With Fiat, on the other hand, the number of recalls has fallen sharply. In 2017, they issued ten recalls and were in seventh place in the list. One year later, Fiat only announced four recalls and shares the 25th position with Dodge. Dropping from fourth to ninth position, we see Renault. Land Rover headed ten places down, with an even bigger drop being seen with Volvo and Mini. The question is whether it is good or bad news for owners.

The most recalled cars in 2018

Some models were affected by more than one recall in 2018. Five or more problems were reported with 17 vehicles. Nine recalls were related to the E-Class from Mercedes, while eight were for Mitsubishi ASX and Outlander. Seven times Peugeot´s 3008 and 5008 were recalled each but also Volkswagen´s Tiguan. On this topic, we wrote a separate article 8 cars with the most recalls in 2018.

A detailed overview of the 2018 recalls

In our detailed overview, we dedicate a separate page to each brand with a precise description of all defects of problematic models. On every page, you can also find a button “Check Recalls by VIN” with links to authorized UK dealers, where you can verify if any of the recalls concern your vehicle.

* Minor recalls concerning cars produced over just a few days are not usually listed.
* Data for this unofficial summary is sourced from Weekly overview reports of RAPEX notifications.